American Top Team East Orlando offers a safe, friendly learning environment that promotes a healthy lifestyle. Our academy welcomes you as a beginner or experienced student. We know what if feels like to step into a martial arts academy for the first time- so our goal is to make you feel comfortable throughout your journey. Our students are here to help each other learn and improve together. ATT East Orlando’s world class curriculum and class structure are designed to create a safe learning environment that is fun and engaging.

Our mission is to inspire our students to become the best version of themselves through world class martial arts training. We will instill a healthy lifestyle that is fun, builds character, confidence, self-discipline, and helps our students achieve their goals and succeed in life.

TRAIN WITH THE BEST MMA TEAM IN THE WORLD! 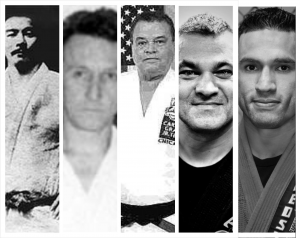 In 2002, Brazilian Jiu-Jitsu World Champion and legendary black belt, Ricardo Liborio teamed up with Dan Lambert to form American Top Team. In just a few years, “ATT”, as it’s commonly referred to, grew into a 20,000 square foot headquarters in Coconut Creek and one of the largest most active Mixed Martial Arts (MMA) teams in the world. The team has thousands of members who train and compete in MMA, Boxing, Muay Thai, Submission Grappling, Wrestling, and Brazilian Jiu-Jitsu. ATT has trained and developed over 100+ fighters in the largest Mixed Martial Arts organizations such as the UFC (“Ultimate Fighting Championship”), WEC, Strikeforce, Bellator, PRIDE, K-1, DREAMS and Sengoku. The American Top Team brand of MMA and jiu-jitsu has now spread from South Florida to more than 60 martial arts academies, across 31 states, 3 countries and still growing. That same knowledge, hard work, perseverance, and dedication honed from our professional MMA fight team, has been passed down to our students.

“There are probably four or five great teams that are capable of putting out world champions, and American Top Team is one of them.”

GET YOUR 2-WEEK PASS TODAY!

GET YOUR 4-WEEK PASS TODAY!

Check us out on Yelp: